Here's a quick peek at my makeup work from this past weekend's "The Haunted Drive-In" for the Fresh Produce Festival of Live Art at the Fridge: 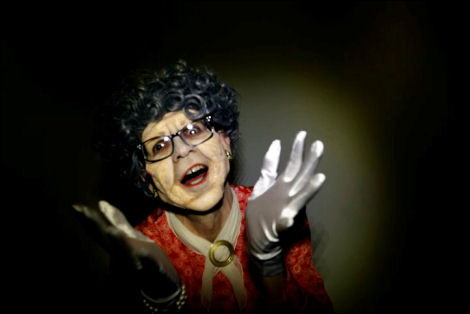 I had worked with Cynthia-- err... Rob, I mean, before on his short film, Invictus. He not only creates shorts, but also re-edits stock and archival footage together and adds a completely original (and most of the time deranged) voice over narration to the shorts. His series, Next to Heaven, are the result of these experiments. I'll say the videos are, for the most part, not safe for work because of language and imagery.

More shots (including a before/after) to come soon on the Makeup page!

-Vaness
www.vanessastrickland.net
Posted by Unknown at 12:34 PM No comments:

"Time in a Trashcan" and "New Writers Now: From Civil War to Civil Rights"

First post of the new year! I'm excited to say I have not one, but two events that I'm involved in this upcoming week:

I'll be in attendance (in the flesh) at the GALA Hispanic Theatre in DC with Young Playwrights Theater, working my community ambassador skills. Our program for the evening, "New Writers Now! From Civil War to Civil Rights," explores the history of the district through a series of short plays written by young students and the elderly. The pre-show reception begins at 6:30 with the staged readings to follow at 7pm. Admission is free!

I'll also be in "attendance" (on the screen) for the CAmm Cine Lounge, at the Creative Alliance at the Patterson. There will be a showing of Running Storm Production's 2010 Baltimore 48 Hour Film Project, "Time in a Trashcan." This event is also this upcoming Monday, February 7th at 7pm. Our film was recognized as an audience favorite when it first premiered, and director Dean Storm will be there to field questions about the film. Admission is only $8 for non-Creative Alliance members and $3 for members.

Hope you can make it out to one or the other! :)

-Vaness
www.vanessastrickland.net
Posted by Unknown at 12:33 PM No comments: