Create the work you want to see 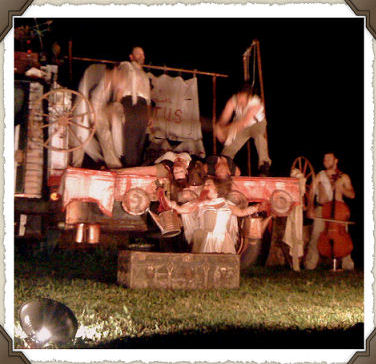 For the past month, I've had the chance to catch a bunch of shows... I think I've seen more shows this July alone than I've seen in the past year. Of course as is the case with artists, when they're busy with their own work, it's hard to get out to see the work of others, but when I have the chance, I love to go and support. Plus, I'm usually inspired by what's out there, what other people are doing, and why.

I won't claim to be a critic, just someone with opinions, a knowledge of theatre, and a good awareness of the kind of shows I tend to enjoy, so rather than write out long reviews, I've been wanting to give at least short[ish?] paragraphs about some of the past few shows I've seen:Stillpointe Theatre Initiative's "Titus Andronicus;" Photo by Vanessa Strickland

Impressionable Player's "Pandora: A Tragicomic Greek Romp" [CapFringe 2011]:
This wonderfully-written show, containing comedy ranging from Judd-Apatow-esque humor to more stark, simplistic dramatic moments was bolstered by the strong and polished acting and direction by the entire Impressionable cast. Even coming in and seeing the set, and then the overall demeanor and intention of the group screamed "Maryland" to me, and in a great way, because I know UMCP for their tenacity to professionalism and their ability to create quality work. The show included several stylistic elements which had me in the palm of their hand, including a gigantic puppet head of Zeus, operated by several people, and the scene with a mythological monster donned in a black bodysuit with a day-glo skeleton outline painted on the surface, which in itself was a puppet of sorts once the stage went dark and the UV lights went on. Just goes to show you can get GREAT results with simple effects that help propel the story. The acting was awesome; emotions and tactics switching on a dime, but most importantly, they were filled with honesty. I was thrilled when Niko and Pandora almost kissed, but at the same time, my heart went out to Eris, Niko's fiance. The actor's emotional exploration of these seemingly archetypal characters naturally had me invested in them. They're running their production of "Romeo & Juliet: Choose Your Own Ending," in New York soon, and I'm excited to see what this group brings to the table next.

Flying V/Wayward Theatre's "Incurable" [CapFringe 2011]:
As soon as I heard the Pixies playing in the first transition in this production, I knew someone had their priorities straight. Biased, I know, but with that, I hoped the rest of the production be consistent in tone and style. And for me, it absolutely was, in the way that any auteur creates a mark on their work. The show centralizes around the fears and insecurities of the main character, Dale, and every aspect of the production helps reveal to us Dale's character: from the music to pop culture (and art history!) references in the script, and clever nerd/geek in-jokes hidden within the dialogue (i.e. Diesel Sweeties, "Kill Bill," "Inception," etc.). The cast for this show was very specific with their characters, and really made the wordiness of the dialogue come off as natural, which was a great foil for the more vulgar dialogue and sex stories, which were also treated with an unforced, straightforward fearlessness that allowed me to believe not only were these characters intelligent, but their sexcapades were totally plausible and not pushing for shock value (think "Clerks"). This was a show after my own heart, but it was executed so well. I've seen shows that completely hinge on reference-after-reference, where it feels like scenes were written just to get around to the one-liner, but this show created a great, fun, and at times, unexpectedly touching story without relying on those devices; rather they were already ingrained into the characterization in such a way that only served to enhance bringing the audience into Dale's perspective.

Molotov Theatre's "Fat Men In Skirts:"
I've seen a few Molotov shows in the past year, and although this one does not necessitate the usual poncho, I still found myself sickened, laughing, sympathizing, and compelled by what I saw. I'd read "Fat Men" back in high school, and perhaps it was my young brain, but somehow I envisioned the show playing out very stoically and seriously. Molotov is excellent at changing up any expectation you might have. From the onset I was giggling at the childlike acrobatics of Bishop as he expounded on his penchant for Audrey Hepburn, and within 15 minutes found myself quietly discomforted when he made a proclamation about his "concrete dick," and shoved his hand inside his zipper hole; in the only way that a young boy emerging from a plane crash on a lonely island with an overbearing, but vapid mother could would know how. His evolution was frightening, and I believed every moment of it. Then later as the play came to a close, those child-like tendencies and vulnerabilities re-emerged in his characterization, and I still felt sympathy for this cannibalistic, mysoginistic murderer. Likewise, his mother, Phyllis, evolved nearly the opposite of Bishop: seemingly an emotionless monster (through no fault of her own, or is it?) goes off the deep end and returns with morality and sympathy, even if it is for her own survival, which ultimately she willingly lets go of as well. Through her character choices, Phyllis clearly had a wall up to keep her from feeling, and as I witnessed her descent, she herself became the child, and Bishop her caretaker; all expressed beautifully by the actors. As for the seemingly more "well-adjusted" characters: Pam/Popo, and Howard/Nestor, the way the actors fought for some kind of stability and love in their own worlds was palpable, their commitment to their less-than-sane counterparts genuine and unconditional. Not without their own foils, Pam/Popo and Howard/Nestor were willing to put themselves through hell to make up for the hell Bishop and Phyllis experienced. I love when a show can expose you to the ugliest aspects of a person and at the same time reveal their humanistic side in such a way that you root for them. I think that's something we all can relate to as people; and this show succeeds with this greatly.

Stillpointe Theatre Intitiative's "Titus Andronicus:"
It amazes me how 10 miles south of my parents house is a bustling city, yet 10 miles north, I can be in the middle of nowhere. I think this sense of displacement definitely helped solidify my experience at "Titus Andronicus." Driving into a field and giving some gypsy bards $12 to plop down and see Shakespeare performed on the back of a rustic, truck bed with antiques appliqued all over it is my idea of a pretty great night. With Raine Bode at the helm and a few fellow actor friends involved, I had great expectations. It was definitely an experiential show, which I think is how I tend to approach art in general: I WANT to be immersed. From the lace on the cuffs of the Emcee to the crimson tassels decorating Lavinia's severed hands, the visual style was clear. The performances too evoked a ragtag group of players from a bygone time; definitely the kind of people that would probably have been performing Shakespeare in a past era. These "actors" playing the characters in Titus had their own respective personalities, which gleaned through every now and then and gave the production some additional humor. Something that specifically stood out to me as being very distinct was the singing of the actor who played Aaron. Periodically his lines would be sung in the style of a slave songs and spirituals, which burst out of him at intense emotional moments. It was really lovely and served well to accent the show. Likewise, I appreciated the unapologetic way the performers portrayed grand-scale moments: the choice of having the entire cast curl their hands into fists and bounce along while the pianist hit out a trotting rhythm was a great solution to working in such a small space, and I could sense the joy of "playing pretend" that these performers had, and it helped to transport the audience into the "actors" world and carry the show.

What all of these shows have in common is each made great work from minimal means and resources. In light of the current economic state (yep, I'm using buzzwords), artistically, I'm seeing people do more with less, and it impresses me to no end. It lets me know that art is something that will always, ALWAYS be present. There will always be an audience, you just have to have the faith and the gall to do what you want. To create the work you want to see.