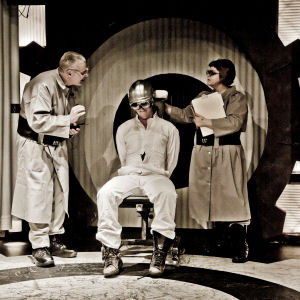 A Clockwork Orange is on vacation this Memorial Day weekend, but will continue with shows the first weekend of June. That hasn't stopped the Frederick News Post from releasing a review of the show, featuring some insight from director Julie Herber and our little Alex, Joe Jalette:

"Herber appreciated Kubrick's film but stayed true to Burgess' play for the MET production, despite knowing audience members would quite possibly expect something different because of the popularity of the film.

'It changes the entire story arc of the character,' Jalette said during an interview."

Read the rest of the article here: Frederick News Post: Cult Classic 'A Clockwork Orange' comes to the MET Stage

It's been a blast so far performing this show and I'm excited to get back to it, but for now, I'll try my best to enjoy a three day weekend... gee whiz! ;)

See you at the theatre!