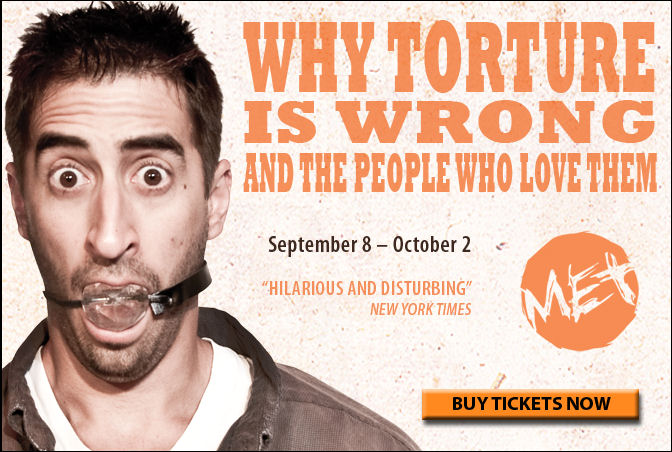 Torture has opened! Click the image above to purchase tickets online, or call the MET box office at 301-694-4744

An article from the Gazette was released yesterday to coincide with preview night. It features some insight from director Gene' Fouche' and actors Tim Seltzer and myself:


"Torture may be wrong, but as seen through the eyes of The Maryland Ensemble Theatre (MET), starting Thursday — it’s also darkly funny. Just prior to the 10-year anniversary of the terrorist attacks of Sept. 11, 2001, the MET will tackle a production of “Why Torture is Wrong, and the People Who Love Them,” a comedy by Christopher Durang.

The play’s heroine, Felicity, wakes up after a night of drinking to find Zamir, a strange man of an indeterminate ethnicity, in bed with her. Having no memory of how she met him, and due to his erratic behavior, she concludes that he must be a terrorist. Felicity goes to her parents for help, and things get worse when she learns that her father, Leonard, is a member of a shadow government who decides to take the situation into his own hands by torturing Zamir into a confession. As things spiral out of control, Felicity wishes more and more for a rewind button, but the outcome is more likely to leave the audience in stitches rather than cowering in fear, says director Gené Fouché."
(Read the rest of the article here)
Hope to see you sometime during the run!
-Vaness
Posted by Unknown at 10:34 AM

Labels: article, Gazette, Maryland Ensemble Theatre, Why Torture is Wrong and the People Who Love Them